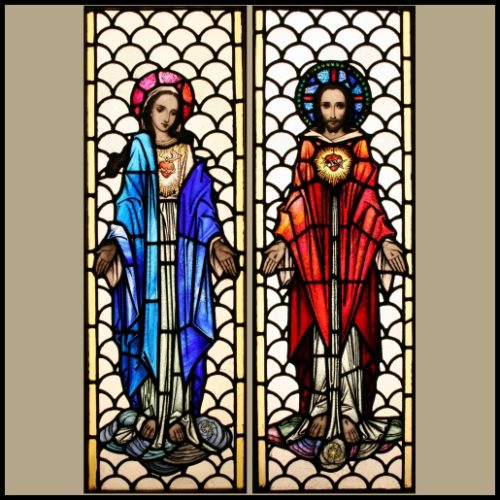 Pair of religious stained glass windows, each leaded and hand painted depicting full length figures of Mary and JC. Each figure is set within scalloped shaped obscure glass. Super quality and with both windows in excellent original condition.

The Earley family were involved with the decorative arts in some form from the 1840’s, being closely associated with A.W.N. Pugin andJohn Hardman of Hardman & Co. Birmingham. The Earley Ecclesiastical Studios were in existence from 1864 to 1975, providing a high standard
of ecclesiastical art during the Gothic revival of the 1800s and the building of Catholic Churches which flourished in the first half of the 20th century.

These windows were removed from the chapel of St Winifred’s Nursing Home, Cardiff, Wales, prior to demolition.