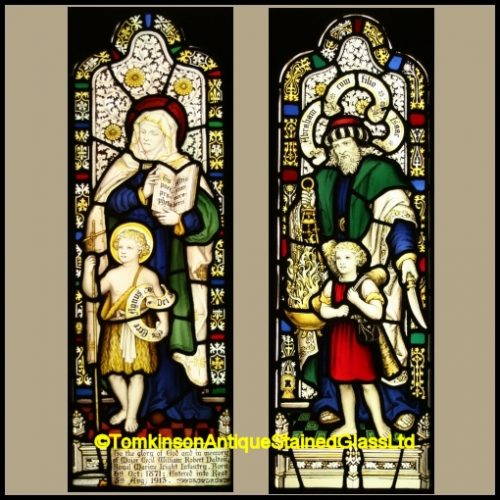 Two antique church stained glass windows, c1915, each leaded with hand painted stained glass. Left window depicts Elizabeth with her infant son, John the Baptist and has a memorial dedication at the bottom. Right window illustrates Abraham with his son Isaac. Both windows have decorative backgrounds and borders, both have the Walter Tower symbol, black tower and golden garb/wheatsheaf. Both in excellent original condition and in mahogany frames of a later date. Can be sold separately.

Walter Ernest Tower studied at the Royal Academy and was a pupil of his uncle Charles Emer Kempe in London where he lived and worked. He was also an architect. He made many stained glass windows in Great Britain and elsewhere.

On Charles Kempe’s death in 1907 the firm was reformed as C. E Kempe & Co. Ltd and Walter Ernest Tower (1873–1955), was appointed Chairman. Tower thenceforth used a black tower above the golden garb.