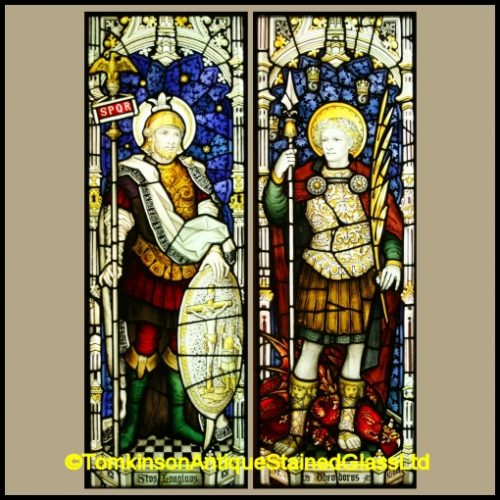 Left window depicts St Longinus a Roman Centurion in full armour, holding a staff and shield with the crucifixion of Jesus.

Right window illustrates St Theodorus a Warrior in armour and with a slain dragon at his feet, he also holds a Palm leaf a symbol of Martyrs.

Walter Ernest Tower studied at the Royal Academy and was a pupil of his uncle, Charles Emer Kempe, in London where he lived and worked. He was also an architect and made many stained glass windows in Great Britain and elsewhere.

On Charles Kempe’s death in 1907 the firm was reformed as C. E. Kempe & Co. and Walter Ernest Tower (1873–1955), was appointed Chairman. Tower thenceforth used a black tower above the golden garb as his stained glass signature.