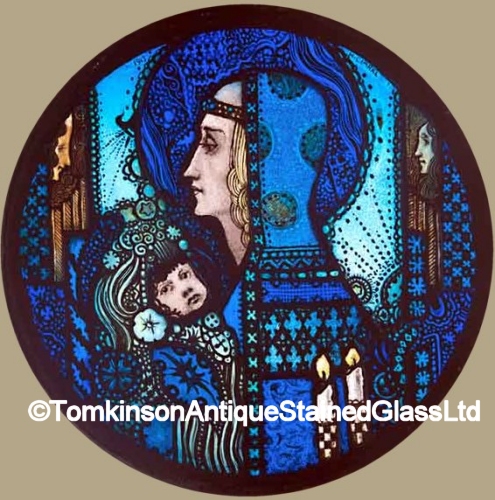 Antique stained glass roundel by Harry Clarke, using acid etching, silver stain paints on flashed blue glass in shades of turquoise and green and
hand painted depicting a profiled head of the Madonna holding the Child who stares at us to the side. There are two white candles acid etched in
the foreground and two angels in profile either side of the Madonna. Signed “Dec1915 – H Clarke to Laurence Waldron” by Clarke in the top right rim and down in front of the Angels face on right.

Clarke made this panel as a Christmas present for Laurence Waldron who was a major patron of his work.

Harry Clarke (17 March 1889 – 6 January 1931) was an Irish stained glass artist and book illustrator. Born in Dublin, he was a leading figure in the
Irish Arts & Crafts Movement.

Dr Nicola Gordon Bowe, a world authority on Clarke, has documented the panel in her book “The Life and Work of Harry Clarke” page 59. She describes the panel as follows:

“Madonna and Child roundel, stained glass, 1915; made for Clarke’s
first major patron, L.A. Waldron, demonstrating the technique he would evolve for his miniature panels over the next few year”