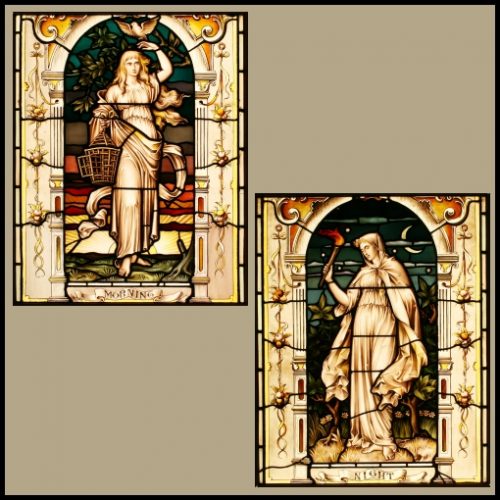 Pair of decorative Arts & Crafts antique stained glass windows, each leaded with hand painted coloured glass depicting Pre-Raphaelite ladies standing within an architectural portico. “Morning” depicts a Lady releasing a Dove from a cage with the rising Sun at her feet. “Night” depicts a Lady holding a flaming torch, behind her are stars and a crescent moon.  Both windows are decorated with swags, garlands, bows, fruit and flowers. Super quality and in excellent condition.

Firm founded by Swaine Bourne (died 1923). During the 1890s Frederick Louis Tait was the chief designer. Swaine Bourne was subsequently joined by his son Kendrick Swaine Bourne (1872-1960), a pupil of Henry Payne at Birmingham School of Art from 1888-91, who took over the firm after his father’s death in 1923. The firm had several addresses in Birmingham and on Tottenham Court Road in London.